Whether you’re a casual gym-goer or a professional weightlifter, everyone can benefit from the functional and highly-effective lower body exercise of the squat.

There are a number of different variations of the squat which can be performed with or without weight. Perhaps the most popular is the back squat with a barbell.

For this particular exercise there are two ways of holding the bar: either high on the upper back or low on the mid-back. Learning how and when to use these two variations is key, as the positioning will ultimately affect which muscles are used.

This guide will take an in-depth look at the low bar and high bar variations of the squat, as well as the main differences between the two. 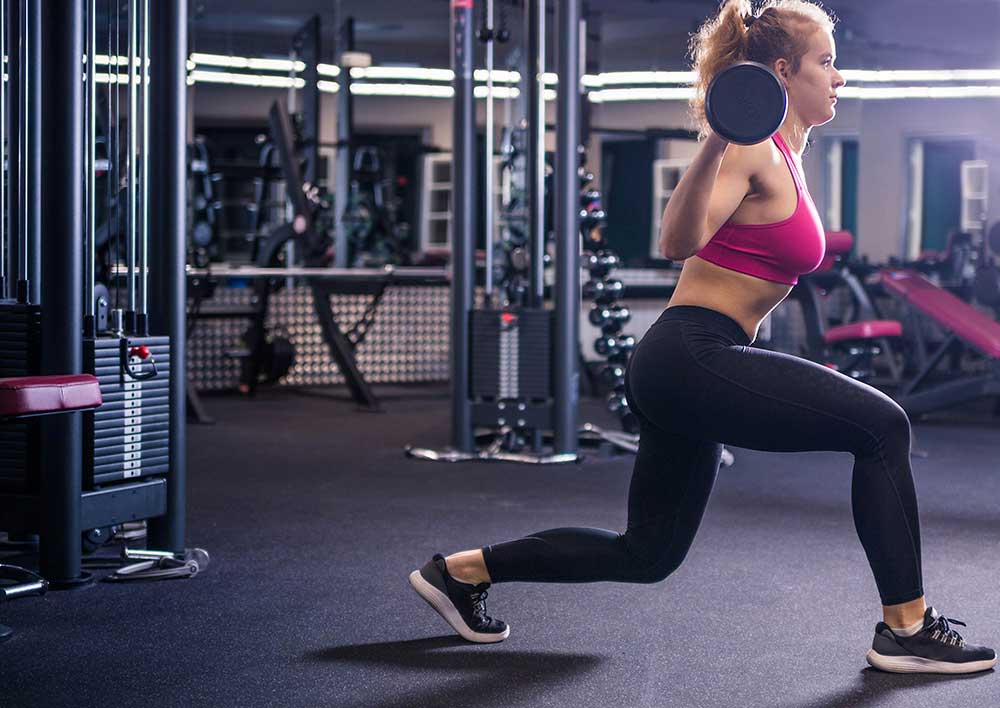 This variation of the back squat has the bar positioned low on upper-to-mid back. Ideally, it should be rested on the posterior deltoid, not the top of the shoulders. The exercise is often used by powerlifters since it allows you to stabilize yourself whilst using a greater amount of weight.

This style of squat exerts more effort on the posterior chain of muscles including the hamstrings, glutes, and back extensors. Therefore, it’s perfect for athletes looking to develop their glutes and better activate the hamstrings.

Another benefit of the low bar squat is that people find they can lift heavier weights, so it’s a great exercise for maximizing strength gains.

Also, this variation is a good option for those who have limited ankle mobility. This is because the knees don’t have to move ahead of the ankles quite as far as some other squat-styles, decreasing the angle of flexion.

The low bar squat is ideal for moving more weight and increasing the effort on the posterior chain. It’s a popular variation used by powerlifters as the movement facilitates heavier lifts. So, if you’re looking for a low-rep or one-rep max exercise that’s easy to perform and will allow you to lift more weight, the low bar squat is an excellent option. 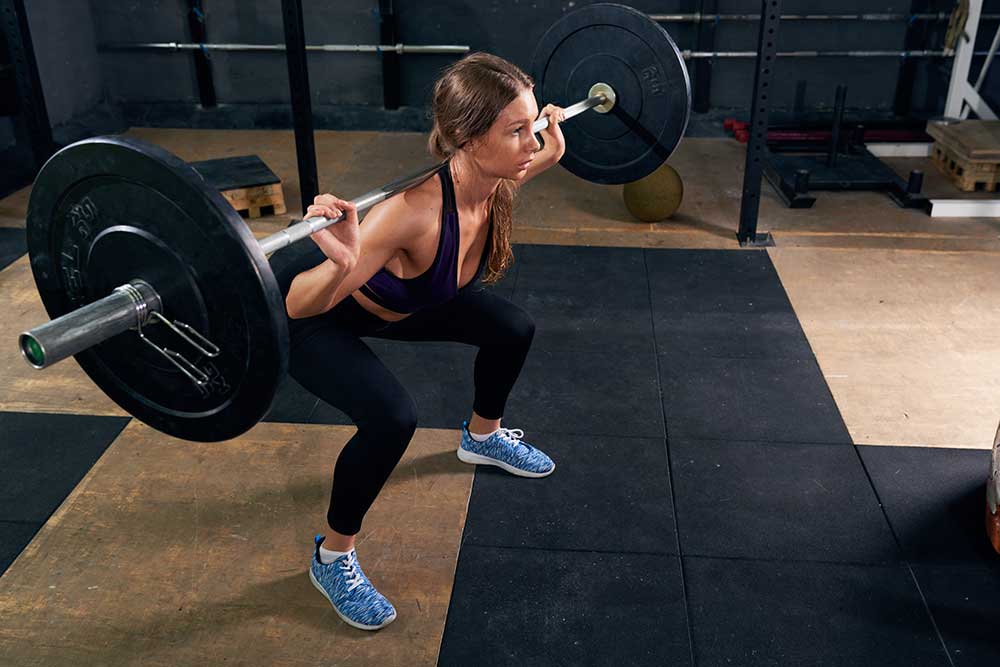 The high bar variation of the back squat is often the first version of a barbell squat that many people learn when they start training with weights. The exercise positions the bar high on the trapezius muscle across the top of the shoulders. This type of squat is well-suited for weightlifters, as the style of the movement is similar to competition movements.

This style of squat is a great exercise for those looking to gain strength and muscle mass in their quadriceps (the muscles on the front of the thighs).

It’s equally effective for those with good ankle mobility, unlike the low bar squat. This is because your knees must advance further past the ankles to get down into the required squat position.

Another benefit of the high bar squat is that it places significantly less stress on the lower back and is much easier to stay balanced than other squat-styles. This is because the bar is naturally over your midfoot from the beginning of the movement.

As mentioned earlier, the high bar squat is often used in weightlifting as it allows athletes to train with a lot of the similar torso, hip, knee, and ankle movements that are used in competition.

This style of squat is essentially the most basic form of squatting, and is great for resembling the “athletic stance”. Therefore, the movement can easily be transferred.

The “athletic stance” is a term used to describe the starting position for most sports. This position involves the athlete standing upright, with their feet shoulder width apart, and their knees slightly bent.

Ultimately, the high bar squat helps athletes strengthen their body in a way that closely mimics an athletic stance.

Needless to say, the defining difference between the low bar and high bar squat is the bar placement. For the low bar squat, the bar rests on your posterior deltoids, while the high bar squat has the bar resting a few inches higher on your traps. Form is just one difference between the two variations, but there are plenty more which we’ll look to explain in greater detail below.

The path of the bar is one of the key similarities between the two. Whether you’re doing a low bar squat or a high bar one, the bar path should stay directly over the midfoot throughout the whole movement.

This explains why the low bar squat often produces a very slight forward lean. By pinning the bar into your shoulder “shelf” the bar will subsequently be positioned behind you. Therefore, to offset this, you’ll lean forward ever so slightly to ensure that the bar is still directly over the center of your feet.

On the other hand, the high bar variation with the bar positioned on your traps will pretty much automatically be above the midfoot at all times. So, one less thing to worry about for this particular exercise.

Either way, it’s important to remember that maintaining a vertical path above your midfoot is a fundamental part of the correct squatting technique for all variations.

The exact difference in muscle recruitment between low bar and high bar squats isn’t entirely clear. However, if you’re typically used to doing high bar squats and decide to switch to the low bar variation, it’s likely that you’ll notice a tangible difference.

This is because the high bar squat requires greater knee flexion, recruiting the anterior muscles - in particular the quadriceps - far more than the posterior chain.

On the other hand, standing up from the low bar squat with the bar positioned on your posterior deltoids will fire up the posterior muscles - most notably your hamstrings and glutes.

Despite these differences, it’s worth noting that most of the major muscles are still used in both variations, just to varying degrees. This is because regardless of whether you’re performing a low bar squat or a high bar one, the bar path and movement pattern will still be extremely similar.

Firstly, it’s important to note that both variations of the back squat will develop strength and build muscle mass. If however, you’re looking for specific strength benefits to fine-tune your training, there are a couple of differences that are worth keeping in mind.

A recent study on 12 experienced male powerlifters compared muscle activation for the two types of back squat - the first study to compare the two variations in the same group of lifters without altering the electrodes in between tests.

Results found that low bar back squats produced significantly greater muscle activity in tested muscle groups than the high bar variation. It’s worth noting that most of the tested muscles were in the posterior chain, but nevertheless, it’s useful information if you’re looking to specifically build strength in your posterior muscles.

Frustratingly, the differences between the two squat types for the quads were found to be negligible.

It’s hardly surprising that low bar back squats are often more effective for strength considering you can load the bar with more weight. For athletes looking to squat to improve their one-rep max, the low bar squat is the obvious best choice.

The low bar and high bar squats have varying mobility requirements. These are important to take into account in order to avoid injury and discomfort.

With the low bar variation, it’s easier for people with limited ankle mobility as there is greater flexion at the hips to help your shins remain perpendicular to the ground.

The low bar squat does however, require greater shoulder stability than the high bar variation to hold the bar in place throughout the exercise.

On the other hand, the high bar squat requires significant knee and ankle flexion due to the upright position of the torso throughout the movement. If you struggle with mobility when simply air squatting to full depth with an upright chest, it’s highly likely that your mobility will be further exposed when performing a high bar squat.

Which Squat is Best for Strengthening Your Main Lifts?

This all depends on what your main lifts are. If you’re a powerlifter, then you’ll want to use the low bar squat the majority of the time, whereas if you’re a weightlifter or CrossFit athlete, the high bar back squat will strengthen your main lifts a lot more effectively.

This isn’t to say that you can’t benefit from switching it up every now and then. Varying your training will reduce the likelihood of plateauing and help improve any weaknesses that you may have.

If you’re not used to recruiting posterior muscles such as your glutes and hamstrings, or don’t know how to properly activate them, then yes, the low bar squat will be a lot more challenging than the traditional squat. In a technical sense however, it isn’t harder than the high bar squat, it’s just a different technique.

To conclude, the low bar and high bar variations of the squat both have their own advantages and disadvantages. Figuring out the best-suited exercise for you will depend on a number of factors, mainly your favored sport, training goals, and mobility.

So, instead of trying to crown a champion of the two variations, it’s much more beneficial to appreciate the strengths of both. After all, whichever squat style you choose, you’ll still be able to effectively develop strength and build muscle mass.