In terms of common gym equipment, the jump box doesn’t look like very much. This unassuming cube may not inspire much enthusiasm - until you see someone using it.

It can be incredible watching the explosive power of someone utilizing a jump box. Jump boxes use something called “plyometric training”. Plyometrics combine speed and power, to give amazing force. Used correctly, a jump box can reduce injury risk, increase endurance, and build power.

Of course, none of this happens if you aren’t using a jump box correctly. Below, we cover some of the most common jump box exercises (including the standard box jump), so you can work this equipment into your routine easily.

Constructing a workout around a jump box 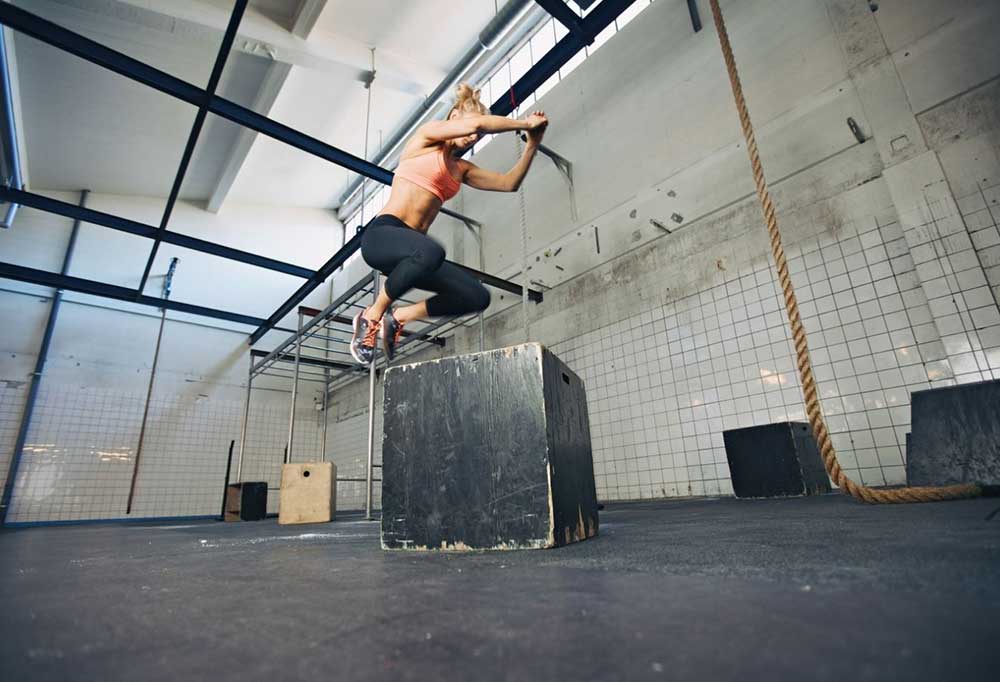 A jump box, sometimes known as a plyo box, can support a whole workout. It’s particularly good for short, repetitive movements, where a user can build up conditioning and endurance. When using the box, it’s important to think about form, rather than just trying to do as much as possible.

Consistent reps will build up strength, and lower the risk of injury. Below are several exercises that can be achieved using a jump box. These work out different parts of the body, and can be tailored to suit your needs. Work through for several reps, take a small break, and then move onto the next one. Cycle through them twice, or even three times, for a better workout.

This is the most basic move for using a jump box, but that doesn’t mean it’s easy. In fact, one of the worst mistakes you can make is saving this move until the end of the workout.

Variations on the box jump

If you want to make a box jump easier, there is one simple method: choose a smaller box. For beginners, try using a stair initially, and slowly build up.

Variations can also be used to make the box jump more difficult (or more engaging).

Try adding weights. Hold a dumbbell in each hand, and carry them through the box jump movement. Alternatively, hold a kettlebell to the chest.

Adding a quarter turn can make the workout more engaging. Stand sideways to the box, with your feet a hip width apart. Bend the knees to a slight squat, push out the hips, and bring the arms back.

Swing the arms forward, explode upward into the jump, and perform a quarter turn in the air. Land with the hips and knees bent, facing forward on the box. Step down, and repeat. Switch sides after every rep.

Similar to how the box jump can be made easier by lowering the height, it can be made harder by choosing a bigger box. When you feel box jumps are becoming too easy, try to increase the height.

This jumping movement engages the legs and the core, as well as the shoulders and chest.

For many, “box jump”, and “burpees” are two dreaded words that should never go hand in hand. The box jump burpee is an intense move that works much of the body. It’s ideal if you find the box jump is no longer achieving much.

Although jumping may be the most obvious use of the jump box, it isn’t it’s only use. In fact, there are lots of ways to use a jump box and work the entire body.

Why Use a Jump Box?

A jump box can help the user to build strength and power. They’re versatile, and adaptable for many types of movement. They’re also small; easy to fit into a home gym.

An intense workout using the jump box can work your quads, glutes, hamstrings, calves, core, arms, and shoulders. You’re required to stay engaged when using a jump box, which can encourage you to work harder. A poorly performed box jump is painful, and you don’t want to risk missing the box. Because a strong level of engagement is necessary, the movements stay tight and controlled, right until the very end.

Using a jump box proves that to have a good workout you don’t need lots of equipment, or even loads of time. Working through a few, basic movements can still improve strength, and foster an explosive power.

Although it’s incredibly cool watching someone explode on to a 60-inch box, it isn’t realistic for most of us. If you ever want to work up to this, you need to start on the right size box. For beginners 5’4” and under, a 16” box is recommended (and some may prefer 14”). Beginners 5’9” and above are best off starting with a 20” box. Once you’re comfortable, a box between 24” and 30” is standard.

Don’t push yourself too fast by picking the wrong size box. Choose a height that feels comfortable, but not easy. Going too high too fast will result in injury, and then it’s even longer until you can advance.

Can You Make Your Own Jump Box?

Yes, it is possible to make your own jump box. All you need is plywood, screws, and wood glue. Be very careful when measuring and cutting, because every part of the box needs to be accurate for a proper hold. Gluing the box before screwing it together provides an extra layer of durability, which is particularly useful when it comes to jumping moves.

It is possible to make your own jump box, but you need to be careful. It needs to withstand a serious workout without the risk of falling apart.

If you don’t want to make your own, look for common objects that can be used instead. Staircases make great starting points for beginners. Otherwise, look for sturdy chairs and benches. A strong jump box will not only be safer, but it can also make the user feel more confident.